The Boat People from Paradise Lost 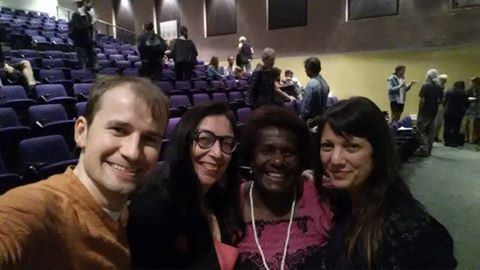 On April 14th 2016, Lyn Bender and other Healthy Futures volunteers attended a speaking tour in Melbourne by Ursula Rakova from the Carteret Islands, Papua New Guinea.  Below is Lyn's account of the event.

In rich countries we speak of climate change as a lifestyle choice or economic problem for some time in the future. For Pacific Islanders it is a life death and survival crisis happening right now, as they watch their islands drown.

I thought I knew the truth about climate change; but it was not deep knowledge. I hadn't seen its face and heard its voice, until I heard from an islander whose home is literally disappearing beneath the waters.

At an event sponsored by Friends of the Earth and Caritas, Ursula Rakova told how the sea that had been the friend of her people, was turning against them. It had crashed through and divided her island in two. Coconut palms were collapsing at the new shoreline.

Food gardens were lost, as the soil was increasingly rendered infertile by salty tides that washed over them. The land that had been handed from grandmother to daughter, would bequeath no legacy to the granddaughters. The homeland of generations was disappearing before their eyes.

Ursula spoke movingly of the collective loss. She is asking for the help of the rich countries whose fossil fuel based prosperity has been achieved at the cost of her people's survival. She represented the many poor and indigenous people who are suffering most from the warming of the planet.

Climate change and the danger it presents to our planet is something many claim to know. But do we feel it? Do we care enough? Do we comprehend the loss of displaced people whose land has been washed away? Do we see that there but for the passage of time, are all our futures?

The government continues to approve new coalmines and seemingly remains lighthearted about the plight of those affected by climate change. Remember the one about sinking Pacific islands? Caught on camera, the Minister for Immigration Peter Dutton quipped to our since deposed prime minister, Tony Abbott, that 'Time doesn't mean anything when you have water lapping at your doors.'

They chortled over that one.

Imagine that being said with compassion instead of in heartless jest.

Listening to Ursula Rakova, the audience at Melbourne University sat in stunned silence. Ursula's task was to head the relocation of the inhabitants of the Carteret Islands and to raise Australia's awareness of the need for climate action. She had been entrusted by the elders to head the project Tulele Peisa, which translates as 'riding the waves on our own'.

The Catholic Church in Bougainville gifted the land of four former plantations for the resettlement of Carteret Islanders. The German Lutheran Church and Protestant Churches have also assisted them.

In preparation for the arrival of ten families, traditional homes were built and cocoa and coconut palms and traditional food gardens were being planted. They were now exporting dried coco pods to chocolate makers in Hamburg. One hundred and thirty more Carteret families were destined for re-settlement.

But all this is a drop in the rising oceans considering the thousands that would be displaced from Tuvalu, Kiribati, the Marshall Islands and more. Will we help these climate refugees?

In 2001 John Howard refused the request by Tuvalu to resettle its climate refugees. Instead, without any apparent sense of the irony, Howard proposed that Tuvalu become part of his Pacific solution for asylum seekers. Meanwhile Immigration Minister Phillip Ruddock declared that the people of Tuvalu did not fit the criteria for refugee resettlement.

The Pacific Islanders are the new boat people. Not all of them have a mother island like Bougainville.

So far ten Carteret families have travelled the 45 nautical miles to Bougainville in 19m banana boats. Each house is built at a cost of $8500.

But in terms of making a contribution, Australia is missing in non-action. Someone in the audience remarked rhetorically. 'How would Australia's coastal cities cope with relocation?'

As I watched Ursula's video, Sisters on the Planet, I was at once profoundly inspired and deeply saddened. I asked her a question. 'How do you deal with your grief?'

Ursula responded. 'We keep our values strong. We teach our children the culture. Even when our islands are gone we will continue to visit them.'

Click here to head back to our blog page.


Would you like to write for our blog?  Let us know here.