It has been a huge few weeks in our campaign to pressure Australia's largest polluter, AGL, to protect our health and our climate. The actions and support of healthcare professionals, students and community members like you are having an impact - thank you to all those who have been involved so far. 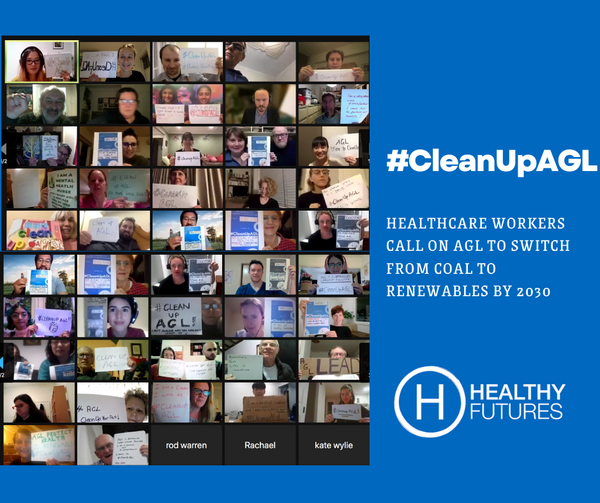 AGL, Australia’s largest energy company, is responsible for 8% of Australia’s greenhouse gas emissions and it currently plans to keep its polluting coal-burning power stations operating until 2048 - well past the deadline that is needed to avoid catastrophic climate change.

Besides contributing to climate change, burning coal produces air pollution associated with heart attacks, strokes, lung cancers, other lung diseases and can affect pregnant women and children. Together with healthcare workers, health organisations and students around the country, we are calling for AGL to commit to replacing its coal power with renewable energy by 2030. In doing so, AGL could save the lives of hundreds of Australians every year from the effects of toxic air pollution and climate change.

What have we been doing?

To date, our open letter to AGL has collected over 500 signatories from health professionals and students and 22 health organisations. The letter has been significant as AGL is hearing from so many trusted professionals in the community that they expect AGL to stop using polluting coal power to protect our health.

Healthy Futures supporters have also joined us over the last few months taking part in digital actions, conversations at workplaces and pushing AGL investors to urge the company to act on climate in the lead-up to their Annual General Meeting, which took place late September.

Is AGL under pressure?
Yes! Extraordinarily, thanks to these actions combined with those of other organisations, we saw a landmark occurrence unprecedented in the history of corporate Australia at AGL’s AGM.

For the first time, the majority of shareholders of a company voted in favour of a climate resolution against the recommendations of the board. The motion recommended adopting targets in line with the Paris Agreement, and linking executive pay to achieving these targets. Alignment with the Paris Agreement means closing coal-fired power stations by 2030.

While the motion won’t bind the company, it will have a huge impact on its future direction and it sends a clear message to the board about what they need to do to keep their jobs.

AGL’s Chair was questioned by Healthy Futures supporter Professor Peter Brooks from the Melbourne School of Population and Global Health on why AGL had failed to consider the risk of lawsuits on health grounds as a material risk. You can listen to his video question here.

At the AGM, we learnt that AGL will now go through a process of developing new climate plans from now until late April 2022. It’s critical that those plans see coal replaced with renewable energy this decade.

Our campaign forges on and we need your continued support.