On Monday 31 January a group of passionate and diverse healthcare workers gathered outside AGL’s office yesterday to take action - an amazing feat on its own considering the demands placed on healthcare workers right now. In a dramatic illustration of the health impacts of burning coal, together we staged a climate die-in to call on Australia's heaviest polluter to replace coal with renewable energy by 2030, in line with recommendations by the World Health Organisation.

During the creative confrontation we heard from speakers including Associate Professor Lou Irving, from the Thoracic Society of Australia and New Zealand, who talked about the impact of burning coal on childhood asthma and life expectancy; and Magdalena Simonis, the President of the Australian Federation of Medical Women, who explained how climate change is a greater risk to health than Covid-19. Latrobe Valley mental health nurse, Veonique Hamilton, also shared “I have witnessed the devastating consequences on the physical and mental health of the community from pollution and extreme weather events from climate change, due to AGLs operations”. 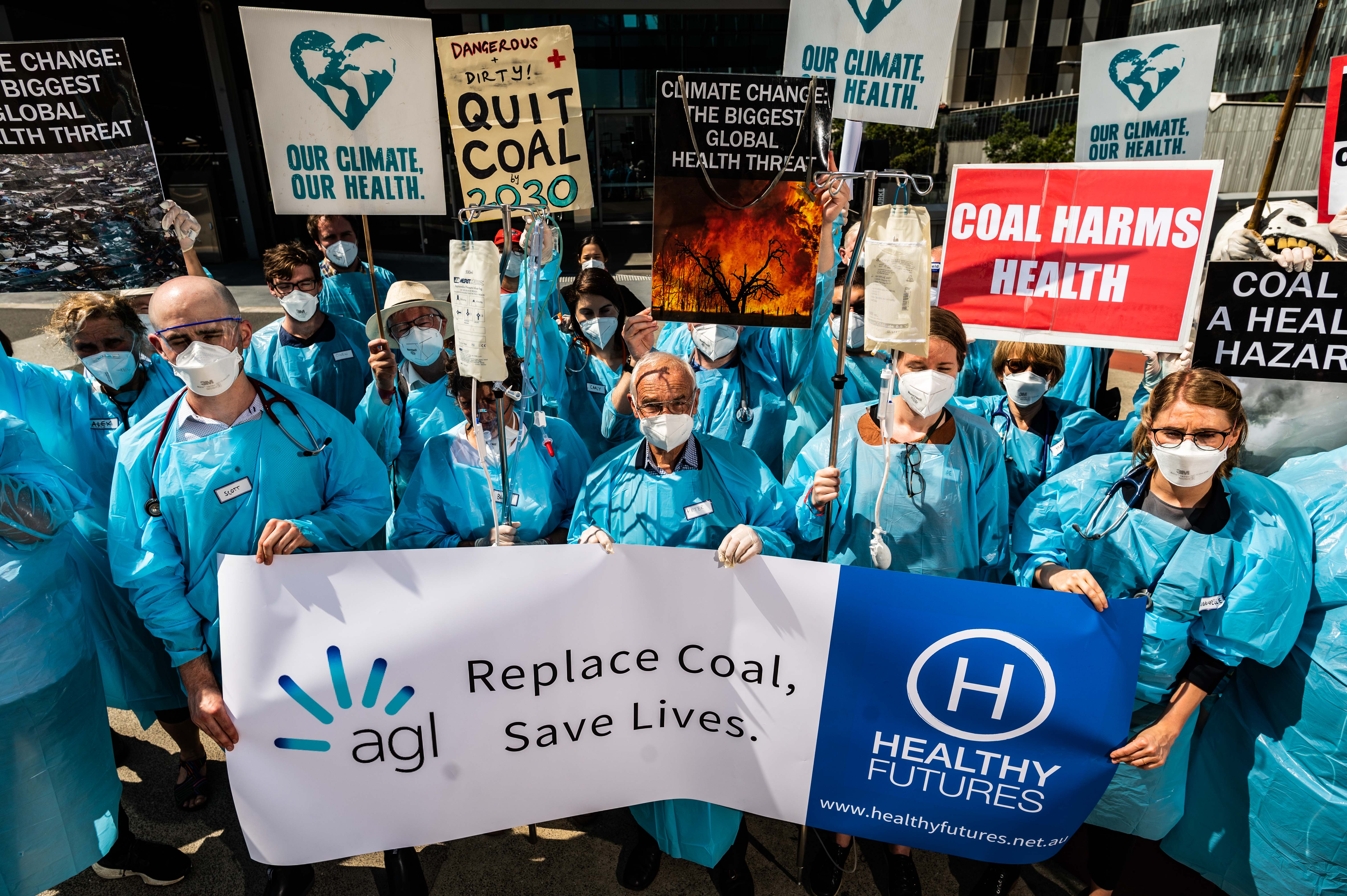 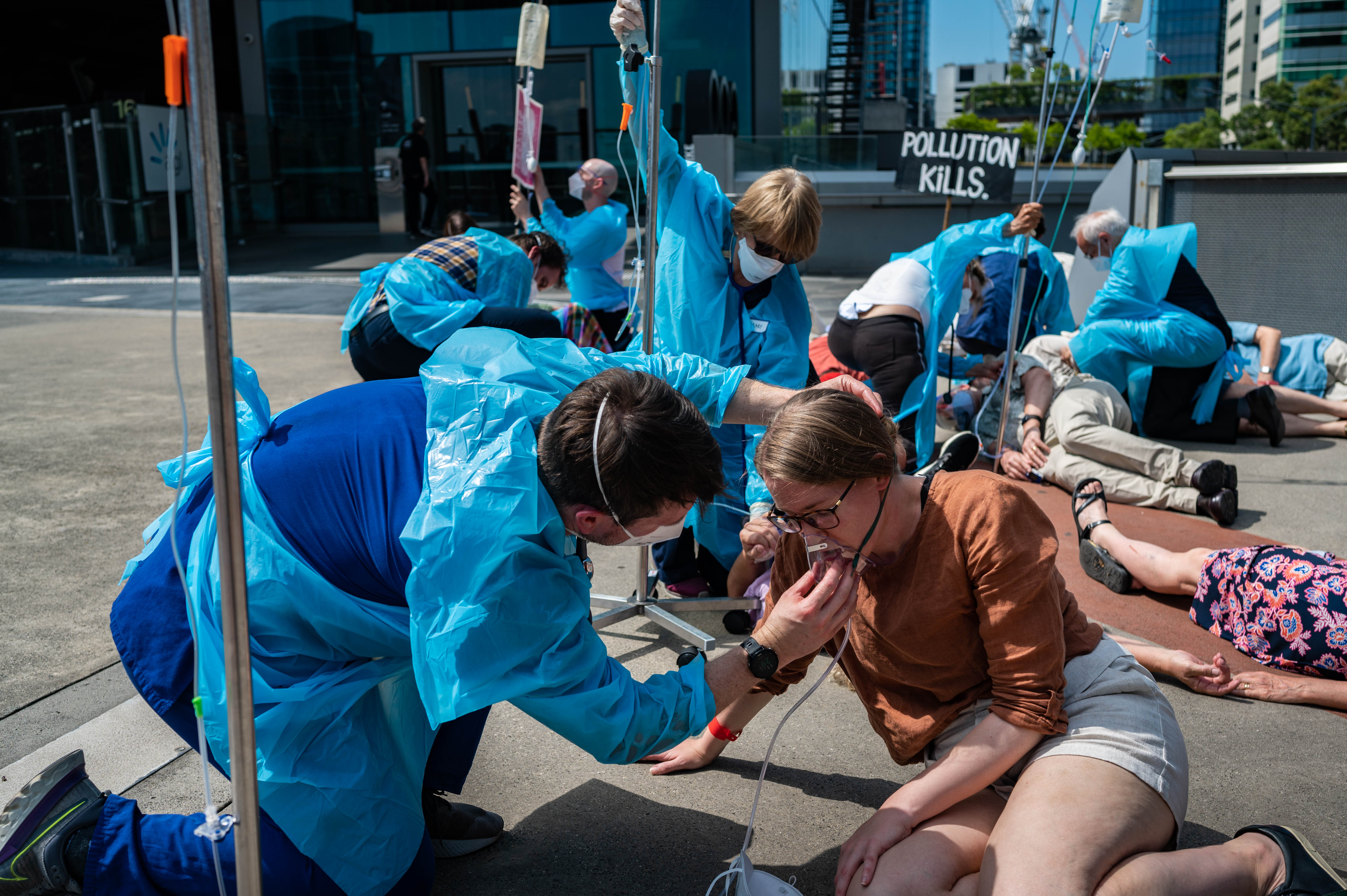 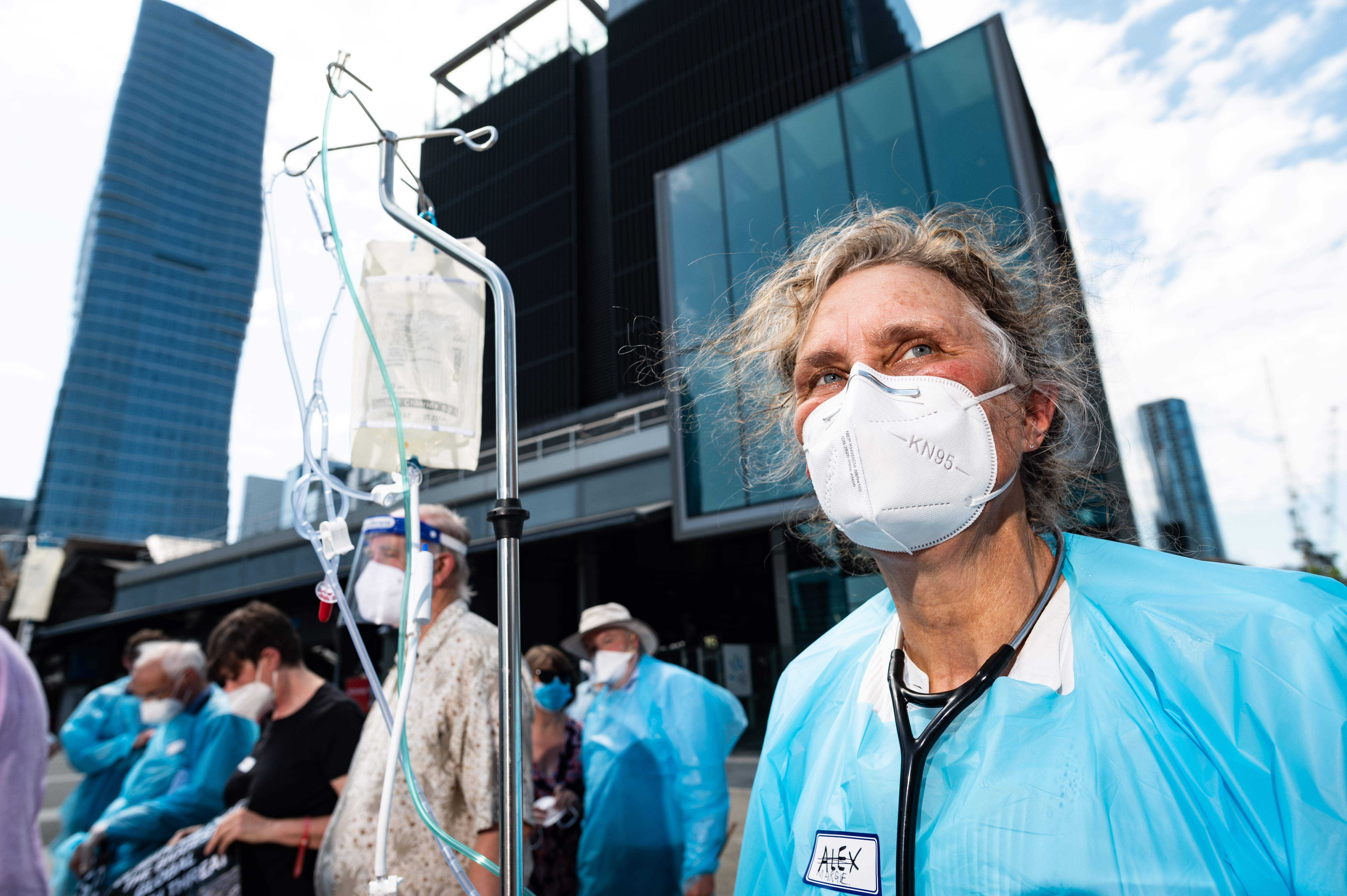 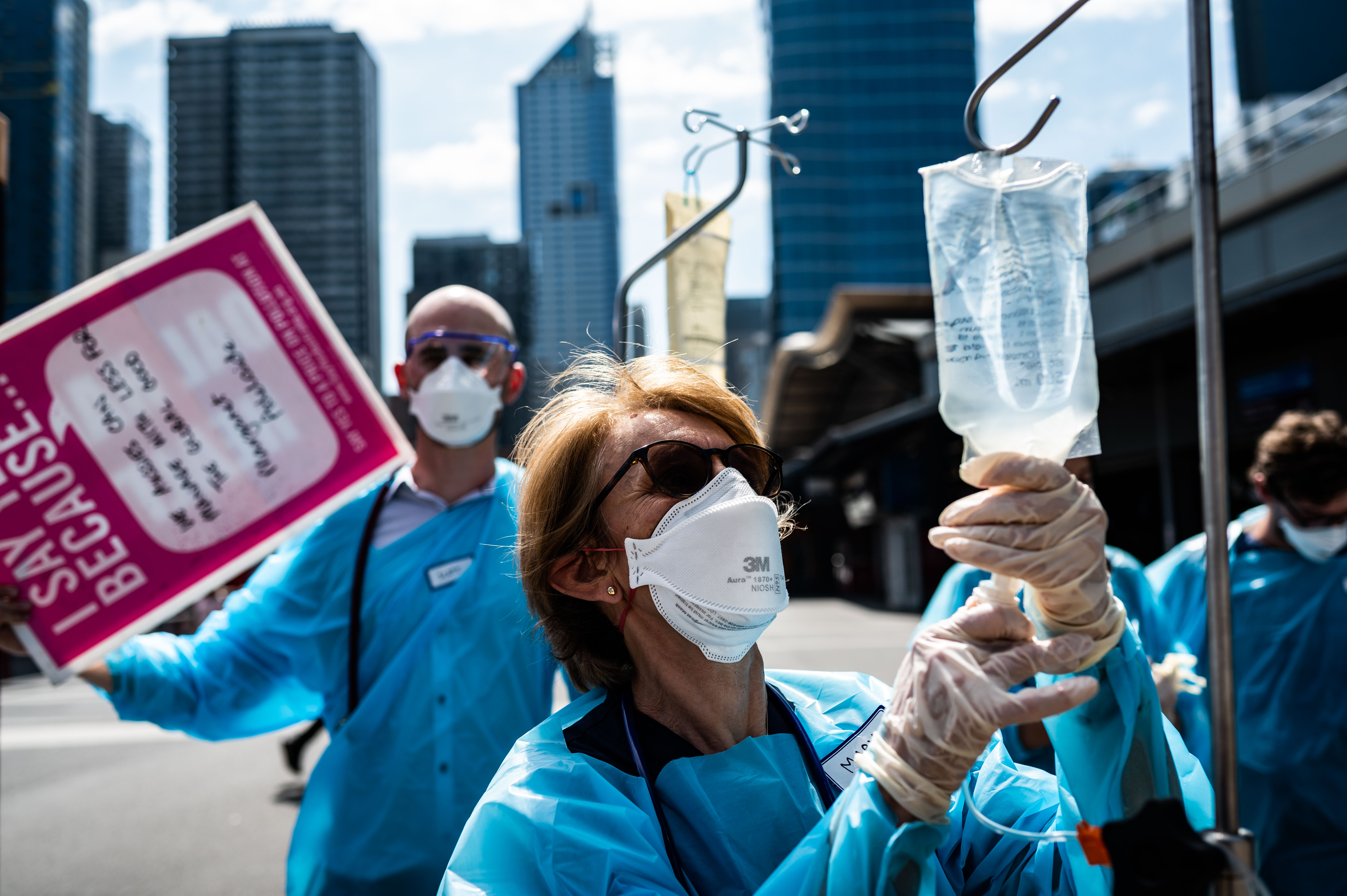 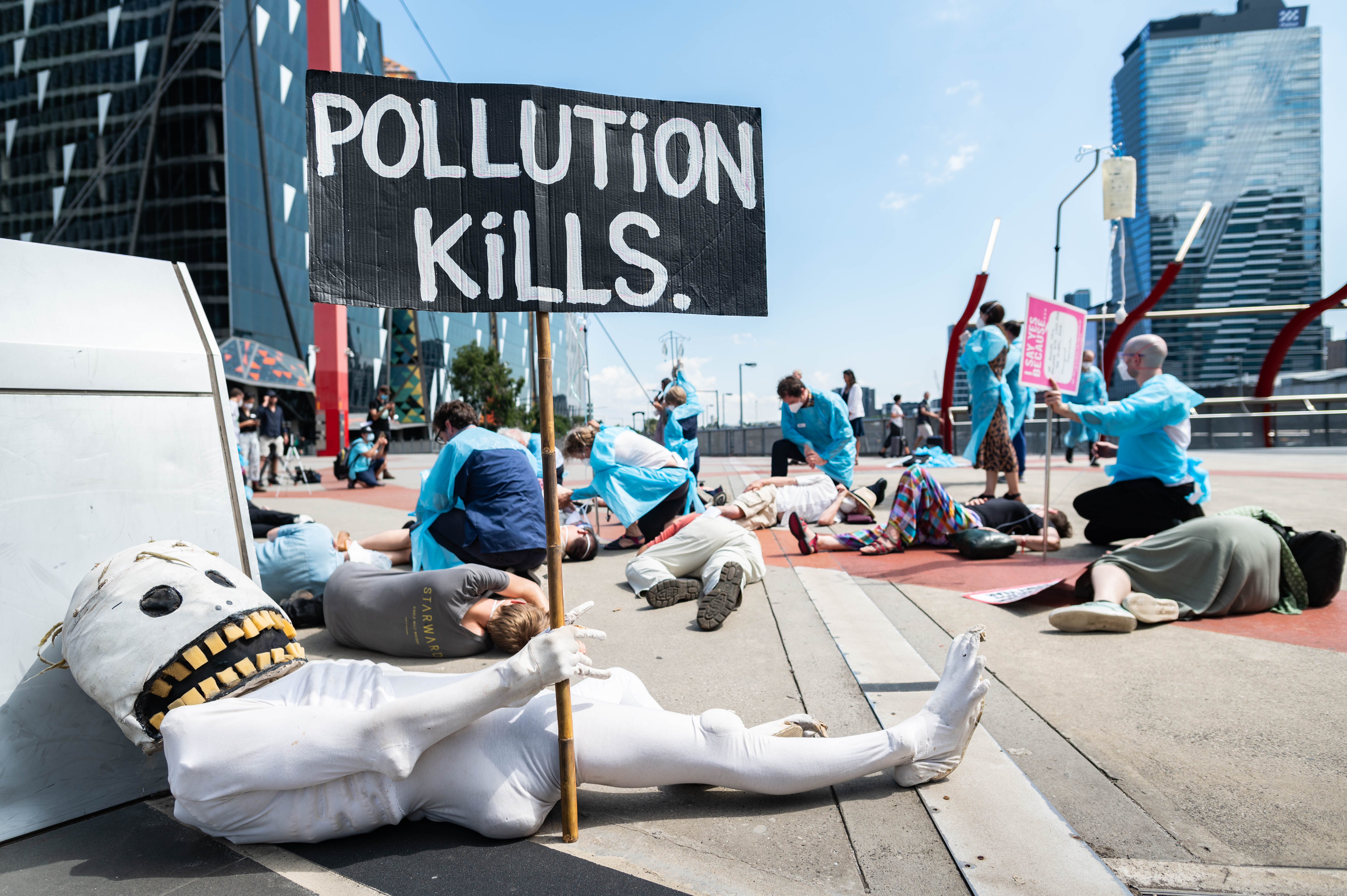 The media have been drawn to our PPE activists, giving them widespread coverage and with most pieces successfully conveying the intention of the action and importance of our open letter (which nearly 700 healthcare workers have now signed). Here’s a list of some of the coverage you might be interested in viewing, and hopefully sharing:

We received a media report collating coverage and it suggested that the audience reach for the TV and radio segments was around 250,000 people!

The response by the public has been humbling. Health organisations, conservation groups, journalists and concerned citizens have been sending messages of support, recruiting others to sign the open letter and sharing the action on social media, which all help to increase pressure on AGL. Can you join in and help share these posts about the action to amplify its impact?

We attempted to deliver the open letter to AGL at the action but they locked the doors on us. They denied us access last year too. This is despite our recent meeting with the CEO who assured us we would be given access this time if we notified AGL prior, which we had done.

Journalist Nick Toscano reported ‘AGL on Monday said it had engaged on multiple occasions with members of the group of health professionals, known as Healthy Futures, and respected their right to express views on the need for faster change. The company said it was working on new climate commitments for its demerged businesses, and would provide an update at its half-year results on February 10’.

We suspect this anticipated climate commitment may not go far enough as we know that for every year coal power stations are in operation, nearly 800 Australians die prematurely. This is why we must maintain pressure on the energy giant until it has replaced coal with renewable energy by 2030.

Stay tuned for what’s next…