"Their passion and bravery keep inspiring me"

Healthy Futures Co-Founder Harry Jennes shares why he was motivated to establish a climate change organisation for health workers and who inspires him each day. 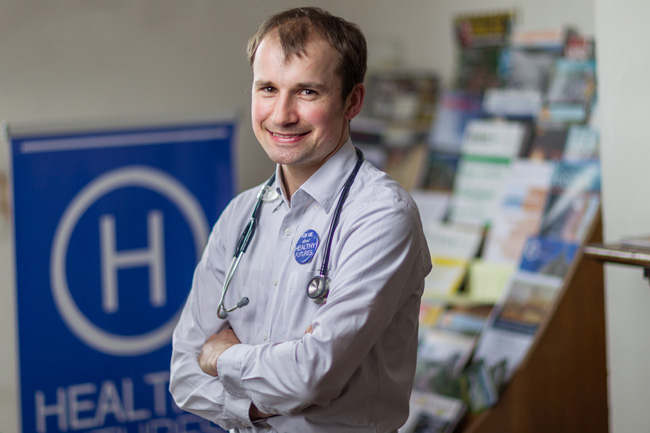 What is the story behind Healthy Futures?

Kate and I started Healthy Futures because we wanted to create an organisation where anyone who cares about climate change and its health impacts can take action together to solve the climate crisis. In 2009 the world’s leading independent medical journal, the Lancet, declared climate change the greatest health threat of the century and we wanted to give people more opportunities to address it. Our first major campaign was for HESTA and Aware Super (then “First State Super”) to divest from fossil fuels and I’m most proud that after five years of grassroots campaigning we succeeded in getting those multi-billion-dollar super funds to divest from coal companies in 2020.

When did you first become concerned about climate change?

For years I was vaguely aware that climate change was a problem, and probably a big problem, but I assumed that scientists and decision-makers would work together to solve it as they seemed to with the ozone layer and other environmental issues. Then in 2012 I attended a Students of Sustainability Conference in Bendigo and saw Pathak Lal Golder from the Bangladesh Krishok Federation speak about how climate change was already causing floods, cyclones, death and destruction in his country. That was when I realised that climate change was killing people right now, that not nearly enough was being done to stop it, that there was another whole world of hurt coming and that we needed to take action right now. I’d always been interested in global health but that was when I decided that climate change was the most urgent issue for me to work on, and it still is.

Climate change is endangering people right now. The sooner we take action, the more lives we save. This is the basic calculus that drives me and that most politicians don’t seem to know or care about. While sometimes it can be challenging work, fortunately it has introduced me to many, many lovely people who care about the same things as me and who are also taking action, and their passion and bravery keep inspiring me!

Tell us about your past work.

Before starting Healthy Futures Kate and I volunteered for Doctors for the Environment Australia and connected with dozens of doctors passionate about climate action. We decided to create an organisation that allowed anyone who worked in or cared about health to work together to achieve the change we need. In the same year we completed the Australian Community Organising Fellowship, then run by the Change Agency, and learned about the diversity and history of social change movements.

Who has inspired you?

In order to act we need both urgency and hope. I was struck by the urgency of climate action after Super Typhoon Haiyan in 2013 when Yeb Sano, Filipino delegate to the UN Climate Summit, wept and begged other countries to “stop this madness”, adding “I speak for the countless people who will no longer be able to speak for themselves after perishing from the storm”. (There is an excellent cut of his speech here and I still cry watching it.) But probably nothing has given me more hope than the success of the Bentley Blockade the very next year, when thousands of people in the Northern Rivers committed to stand against the police, the state government and Metgasco and stopped them from fracking the land - proving that when people organise they can still change the course of history, just as they have around the world many times before.

What’s your vision for the future?

Everyone in the world having every opportunity available to live healthy, happy lives.

Something fun, quirky or random about yourself that we might not know?

I used to be in a youth circus and for about twenty years on and off have been practising to do the splits. Haven’t got there yet but I hope to one day.