"We are addressing the greatest threat to our species at this present time."

Kate Lardner is Healthy Future's Co-Founder (based in Bunurong country). Her passion for creating opportunities for health workers to address the greatest health emergency of our time, led to her starting up her own organisation. 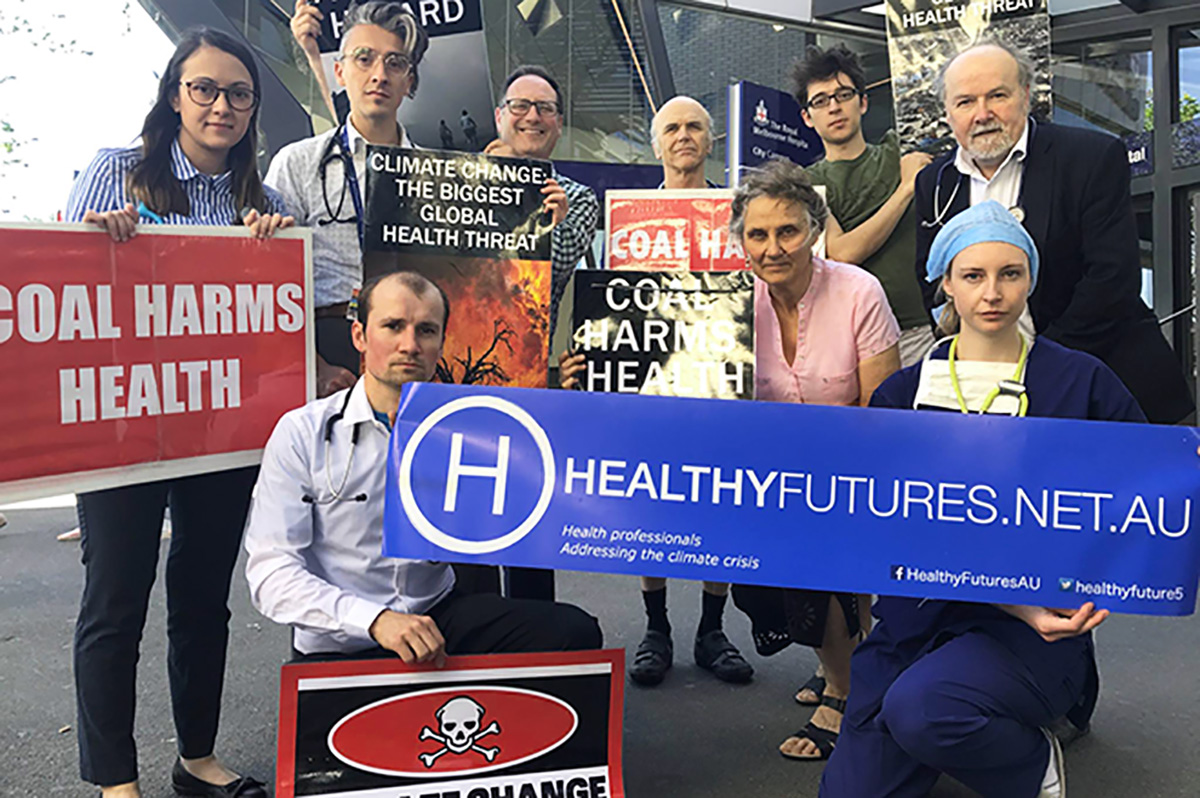 Please tell us the story of how it all began and what you are most proud of so far?

I was driven by frustration actually! The existing organisations for healthcare workers to take action on climate change lacked strategy and grassroots momentum. The problem of climate change was so extensive that I didn’t think we had time to control everything that everyone did and said. I wanted to create a grassroots machine of healthcare workers who were able to be supported to take the action they thought was warranted, and to be able to do it while working with others. I wanted to create a movement akin to tobacco that healthcare workers were pivotal in.

I was running a climate group in Gippsland and I was keen for this group to shape the organisation. This failed to eventuate and I came to work with Harry, who acknowledged defeat after exhausting other avenues to create effective ways of change through existing organisations. We realised that there was a niche in the heath and climate space, and that was the grassroots campaigning space.

Harry and I completed the Community Organising Fellowship run by the change agency, while also studying medicine (me) and working as a medical intern (Harry). From here Healthy Futures was born.

I am most proud of our processes which are always collaborative and with integrity - whether that is towards staff, volunteers, or other organisations. We take the high road, because addressing climate change is as much about how you do it; climate justice. We are creating a better world as well as reaching targets.

Tell us about your past work.

The day I turned 14 and 9 months I went out and got a job as a paper-girl. I wanted autonomy and financial independence. I then worked at a GP clinic in high school and decided I wanted to be a doctor. Before studying medicine I studied physio. My first job as a physio was in the NT at the Royal Darwin hospital. This and working overseas taught me about different cultures, different ways people live, and different perspectives on what living a ‘good life’ means. I later worked as a doctor in Melbourne, Bendigo, and the Mornington Peninsula.

With regards to activism, I had medical students at the Gippsland campus sign on to the petition to ban unconventional gas exploration in Seaspray which was then presented to council. I ran Gippsland 2020 for 12 months, a not-for-profit organisation focused on renewable energy projects. I convened the Doctors for the Environment 2014 annual conference with keynote speakers such as Tim Flannery, and Ross Garnaut, and politicians Greg Hunt, Mark Butler, and Richard Di Natale with over 400 participants, and sat on the Victorian committee. I co-convened the AMSA Global Health Series on Climate Change with medical students, and I continue to help run the Climate Change workshop for the Gippsland medical students. I am an AMA Doctors in Training member, and represent the AMA on the Department of Health and Human Services Sustainability Committee.

Why do you think Climate Action is so important?

Because climate change is human induced, only we have the power, and the opportunity, to mitigate it. But it requires us leaving what we know and reaching for something better….a better way of existing, and co-existing. A better future, and a better world. So many intersectional issues are entwined in global warming, we can make a better world by addressing climate change - reducing poverty, improving the conditions that domesticated animals live in, giving women equal rights, recognising the critical role of traditions and teachings of indigenous cultures. And in doing so, save our planet, our species, and other species on Earth that we are capable of protecting.

What’s your vision for the future?

We would live in a decarbonised world, with strong local communities that had some governing power and could produce and trade. The terms very low, low and middle income countries would no longer exist, as poverty would be eradicated. We would allow for people to have rights over their bodies such as abortion and euthanasia. We would have technological solutions for ‘normal’ processes that are cruel, such as lab grown animal meat instead of mass killings of livestock. We would remember that emotions are important, that love is central to our species existing in harmony. War would not exist, neither would money in the form that we know it. Education would not divide into haves and have-nots. We would appreciate diversity and disability. Gender would be fluid, as would sexuality which would lend to tolerance rather than discrimination.

…There’s a lot of work to be done in a short lifetime!

Something fun, quirky or random about yourself that we might not know?

"I grew up thinking I was Elvis reincarnated"

"As doctors we are taught to treat the disease and not just the symptoms."