UPDATE: In late September 2022 AGL announced it would bring forward the closure of its dirtiest coal power station - Loy Yang A in Victoria's Latrobe Valley - by 10 years! This is another positive step in the right direction and is thanks to the hard work of health workers and allies pressuring Australia's largest climate polluter.

May 2022: Today marks a huge watershed movement in the long-running campaign to shift Australia’s biggest climate polluter AGL to replace its coal-burning power stations with renewable energy by 2030 - a campaign that hundreds of healthcare workers, organisations and community members have played a critical role in and one in which you should feel proud.

After over a year of pressure involving health groups, environment groups and shareholder activist groups, AGL has finally announced it will dump its dangerous and controversial plans to split the company in two. This has triggered the resignation of the CEO, the chair and two board members and a strategic review for a new direction for the company, which has failed to recognise that its business model won’t work in a world shifting rapidly to safe renewable energy.

So how did this happen? 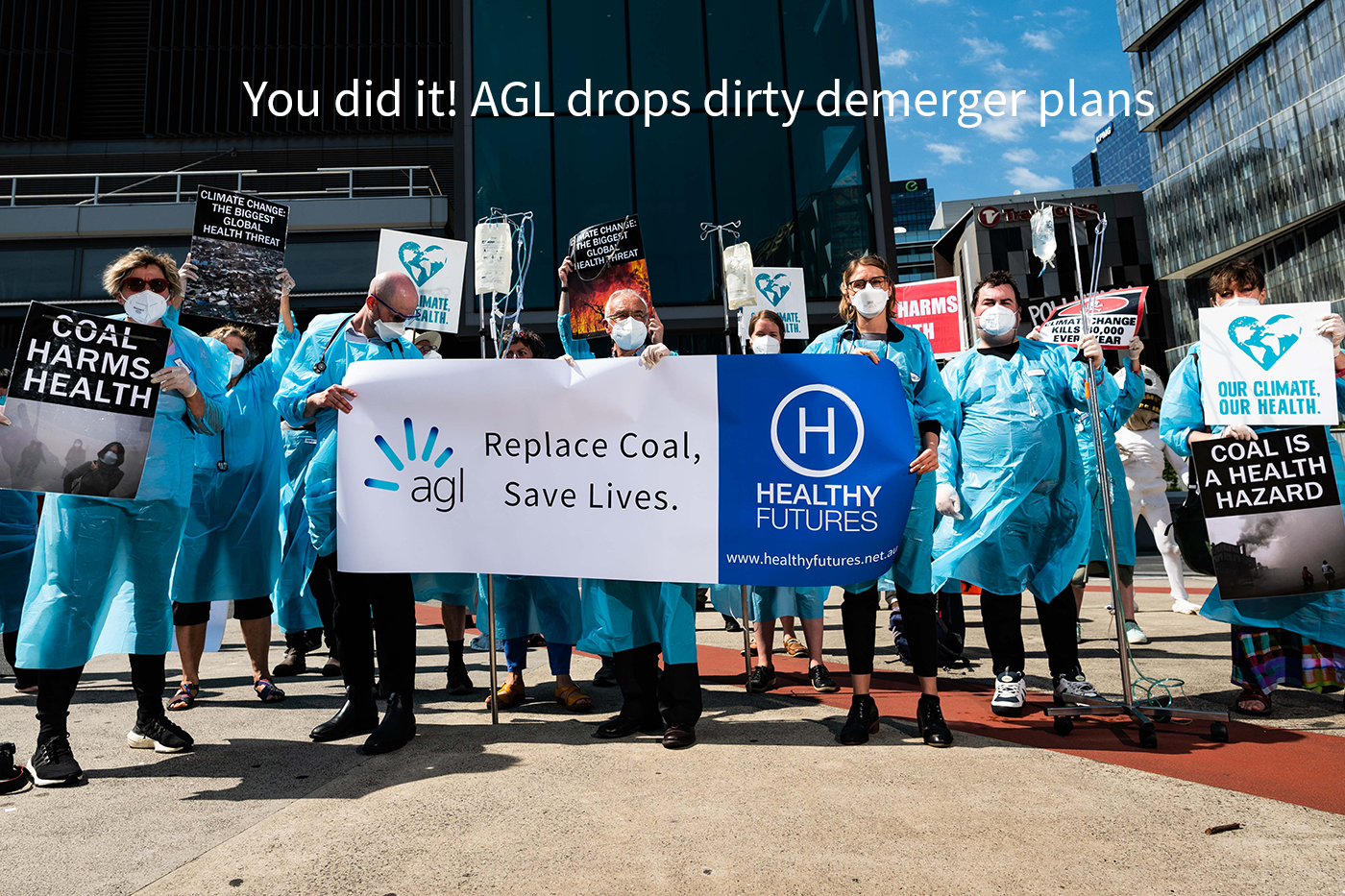 Aligning with the Paris Agreement
Since the launch of our open letter calling for AGL to align with the World Health Organization and International Energy Agency’s findings that wealthy countries need to move past coal by 2030, over 750 healthcare workers and 25 health organisations have joined the campaign.

Shifting AGL into the 21st century would produce enormous benefits for community health. Research we released in April found that an estimated 1500 lives would be saved and tens of thousands of asthma incidents in children would be prevented if AGL’s Loy Yang A power station were replaced with renewable energy this decade.

AGL knew full well that its business plans - which would have seen Loy Yang A running as late as 2045 - would not wash with customers, nor with bankers or insurers whose policies have only gotten stronger as movements pushed them to change.

In a desperate move, AGL decided to try to split the company in two, to greenwash its electricity retail business and shield its polluting coal-burning power stations from scrutiny in a separate business. As over a hundred healthcare workers and a dozen health organisations made clear, that company would have been a disaster for the climate, for site rehabilitation and for the workforce.

Health in Action
Since early last year, healthcare workers have been taking action by bringing more groups and people into the campaign, staging actions outside the office of AGL and its shareholders, highlighting the health impacts of AGL’s operations, directly lobbying the company and its investors to oppose the demerger and support climate-aligned shareholder resolutions and grilling AGL at its annual general meeting.. Our efforts combined with the Australasian Centre for Corporate Responsibility (who have been calling for board renewal for years) and the international environment group Greenpeace led to a 53% vote in favour of a resolution calling for AGL to disclose plans to align its business with the Paris Agreement - a historic majority vote.

Facing resistance
Yet AGL’s management failed to listen, it underestimated the strength of the forces stacked against them, and it even tried to undermine renewable energy forecasts by the very agency charged with looking after the reliability of the electricity system. None of this was surprising given the CEO’s long history of delaying action on climate change.

In late January 2022, healthcare workers staged a die-in outside AGL’s office in Melbourne with a clear call: “Dangerous and dirty: quit coal by 2030”. AGL clearly didn’t like the heat, yet failed to make any meaningful commitments beyond bringing forward its coal closures by just a few years.

Sparks of change
An unexpected twist came in February this year, when Grok Ventures announced a plan to take over AGL, bring billions of funds from an infrastructure investor to build 10 gigawatts of renewable energy and allow Loy Yang A and Bayswater to be retired as early as 2030. Yet AGL’s board twice rejected this lifeline having put so much effort into the demerger. Grok then bought 11.3% of the company - raising serious doubts about AGL’s ability to muster the 75% shareholder support needed to split the company.

We knew we had to work hard to convince at least 25% of AGL shareholders to vote down the demerger plans scheduled for 15 June. Reacting quickly, over a hundred of you joined with twelve prominent health and community organisations within less than a week to write to AGL’s shareholders that the time to publicly commit to vote down the demerger was now. That letter was also delivered in person to Aware Super following an action outside an Energy Transition Summit in May, triggering Aware Super to invite Healthy Futures and others to meet with them to discuss its role.

Turning point
Late last week, the health super fund HESTA, who has been hearing from healthcare workers since early last year and were initially supportive of the demerger, finally committed to voting it down, with others expected to follow suit. It was this public opposition, brought about by the unrelenting pressure by its members and other health care workers, which set a ball rolling that eventually saw AGL’s plans seriously unravel.

Today AGL’s board has finally conceded defeat, cancelling both the demerger and the extraordinary general meeting. The CEO and Board Chair will be forced to stand down, along with two other board members, so that a more competent management can forge a new pathway for the company.

There’s plenty to do to ensure that Australia’s biggest climate polluter becomes the climate leader we need. We need AGL to commit to a a clear timebound plan to transition to 100% renewable energy by 2030 to protect communities’ health and our climate. We need this commitment to be made now to give certainty to communities who deserve better than sudden unexpected closures as the energy transition marches on.

Today we can be thankful  that key blockers to change will go and AGL’s reckless demerger is finally dead and buried. This is thanks in no small part to people like you prepared to take action for a healthy future.

If you work or study in health please sign our open letter to AGL to keep the pressure on: www.healthyfutures.net.au/agl

Please support our work with a tax-deductible donation at www.healthyfutures.net.au/donate